Greek Coffee (in the pot)

Turkish coffee refers to a method of brewing very finely ground coffee. Any coffee bean may be used; arabica varieties are considered best, but robusta or a blend is also used. The beans must be ground to a very fine powder, which is left in the coffee when served. 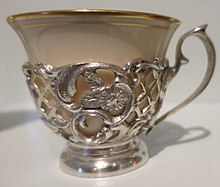 Turkish coffee is made by bringing very finely ground coffee beans with water and usually sugar to the boil in a special pot called cezve. As soon as the mixture begins to froth, and before it boils over, about one-third of the coffee is distributed to individual cups; the remaining amount is returned to the fire and distributed to the cups as soon as it starts to boil. The coffee is traditionally served in a special type of small porcelain cup called a kahve finjanı.

Sugar is added to Turkish coffee while brewing, so the amount of sugar must be specified when preparing the coffee. It may be served unsweetened (Turkish: sade kahve), with little or moderate sugar (Turkish: orta şekerli), or sweet (Turkish: tatlı). Plain coffee is usually served with Turkish delight, or sometimes a piece of rock candy. It may also be spiced with cardamom.

A book suggests that a soda can be made by brewing an extra-sweet cardamom-flavored Turkish coffee syrup and mixing with seltzer or otherwise carbonating after the mixture has cooled.

First appearing in the Ottoman Empire, under the strictest interpretations of the Quran the strong coffee was considered a drug and its consumption was forbidden. Due to the immense popularity of the beverage, the sultan eventually lifted this prohibition.

Turkish coffee culture had reached Britain and France by the mid to late 17th century. The first coffee house in Britain was opened by a Turkish Jew in the mid 17th century. In the 1680s, the Turkish ambassador to France reportedly threw lavish parties for the city’s elite where African slaves served coffee to guests in porcelain finjans on gold or silver saucers.

Superstition says the grounds left after drinking Turkish coffee can be used for fortune-telling. The cup is commonly turned over into the saucer to cool, and it is believed by some that the patterns of the coffee grounds can be used for a method of fortune telling known as tasseography.

As well as being an everyday beverage, Turkish coffee is also a part of the traditional Turkish wedding custom. As a prologue to marriage, the bridegroom’s parents (in the lack of his father, his mother and an elderly member of his family) must visit the young girl’s family to ask the hand of the bride-to-be and the blessings of her parents upon the upcoming marriage. During this meeting, the bride-to-be must prepare and serve Turkish coffee to the guests. For the groom’s coffee, the bride-to-be sometimes uses salt instead of sugar to gauge his character. If the bridegroom drinks his coffee without any sign of displeasure, the bride-to-be assumes that the groom is good-tempered and patient. As the groom already comes as the demanding party to the girl’s house, in fact it is the boy who is passing an exam and etiquette requires him to receive with all smiles this particular present from the girl, although in some parts of the country this may be considered as a lack of desire on the part of the girl for marriage with that candidate.[12]

In Bosnia and Herzegovina, Turkish coffee is also called “Bosnian coffee” (Bosnian: bosanska kahva), which is made slightly differently from its Turkish counterpart. A deviation from the Turkish preparation is that when the water reaches its boiling point, a small amount is saved aside for later, usually in a coffee cup. Then, the coffee is added to the pot (džezva), and the remaining water in the cup is added to the pot. Everything is put back on the heat source to reach its boiling point again, which only takes a couple of seconds since the coffee is already very hot. Coffee drinking in Bosnia is a traditional daily custom and plays an important role during social gatherings. 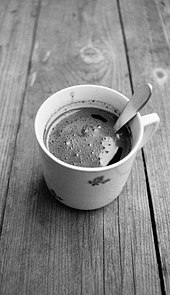 A beverage called “turecká káva” or “turek” is also very popular in the Czech Republic and Slovakia, even if other forms of coffee preparation (such as espresso) have become widespread in the last few decades, decreasing the popularity of turek. Cafés usually do not serve turek any more, in contrast to pubs and kiosks, but turek is still often served in households. The Czech and Slovak form of Turkish coffee is different from Turkish coffee in Turkey, the Arab world or Balkan countries, since cezve is not used. It is in fact the simplest possible method to make coffee: ground coffee is poured with boiling or almost boiling water. The weight of coffee and the volume of water depend only on the taste of the consumer. In Lithuania, this method was the only method that people made coffee during last decades, however never called it Turkish coffee. The method is widely used in the households to this day.[14] In recent years, genuine Turkish coffee made in a cezve (džezva in Czech) has also appeared, but Turkish coffee is still understood, in most cases, as described above.

In Greece, Turkish coffee was formerly referred to simply as ‘Turkish’ (τούρκικος). But political tensions with Turkey in the 1960s (Istanbul pogrom) led to the political euphemism ‘Greek coffee’ (ελληνικός καφές), which became even more popular after the Turkish invasion of Cyprus in 1974: “… Greek–Turkish relations at all levels became strained, “Turkish coffee” became “Greek coffee” by substitution of one Greek word for another while leaving the Arabic loan-word, for which there is no Greek equivalent, unchanged.”[18][19] There were even advertising campaigns promoting the name “Greek coffee” in the 1990s, which acknowledged the usage of “Turkish”: “Thousands of Greeks follow the habit of calling their beloved coffee ‘Turkish’.”

This website uses cookies to improve your experience while you navigate through the website. Out of these, the cookies that are categorized as necessary are stored on your browser as they are essential for the working of basic functionalities of the website. We also use third-party cookies that help us analyze and understand how you use this website. These cookies will be stored in your browser only with your consent. You also have the option to opt-out of these cookies. But opting out of some of these cookies may affect your browsing experience.
Necessary Always Enabled

Any cookies that may not be particularly necessary for the website to function and is used specifically to collect user personal data via analytics, ads, other embedded contents are termed as non-necessary cookies. It is mandatory to procure user consent prior to running these cookies on your website.